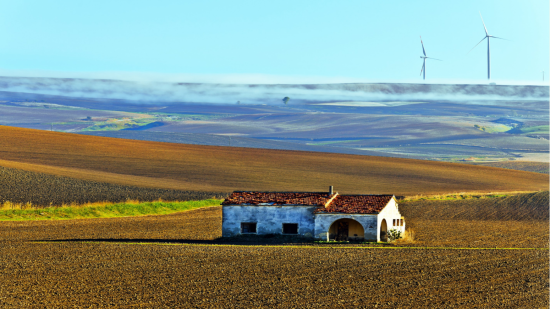 This Learning Guide is based on the following source(s):

More often in rural than in urban areas, markets can’t provide enough goods and services to meet local needs. What can governments, non-state actors and community members do to meet needs when this happens?

This Learning Guide provides an essential overview of market failure in rural areas, including its key drivers and risks, and illustrates multiple government-led and alternative governance mechanisms that respond to market failures and leverage rural-urban linkages.

Markets more often fail to supply necessary goods and services in rural areas than in cities. This is because market failure tends to be tied to feedback loop of goods and service inaccessibility. Compared to cities, rural areas have fewer people who live farther away from each other. In most cases, this makes rural markets less profitable: companies have fewer potential customers and need to spend more money on logistics to reach them.

To stay in rural areas, the private sector needs enough public sector support to counteract lower profits. But sometimes, governments are unable (e.g., because of budget cuts) or unwilling to fill this resource gap. This creates a service void, which makes the area a less attractive place to live, which leads to further decline in the population, which shrinks a company’s potential customer base.

Economies everywhere fluctuate, with regular market ebs and flows that can result in short-term supply-demand gaps. Though every place will experience some service supply lags occassionally, pervasive market failure in rural areas that affects essential services often stems from and reinforces structural political and economic conditions. 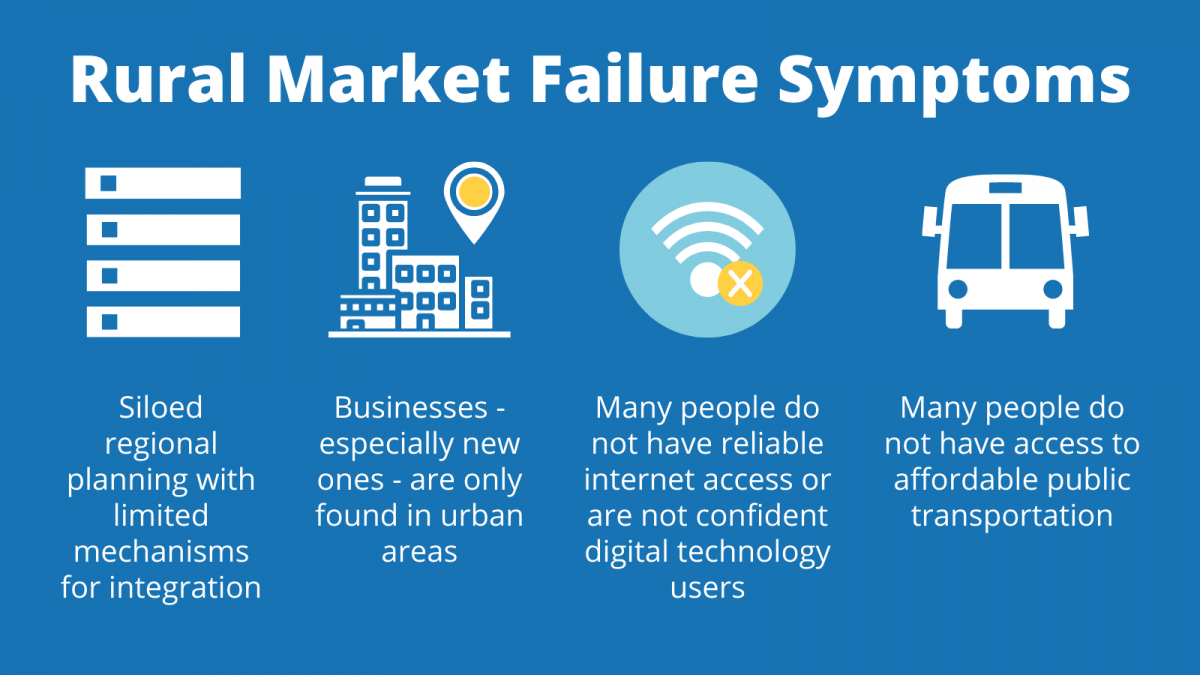 A region might be at risk of market failure that can spiral into goods and service desertification in rural areas if any of the following are true:

People everywhere need reliable access to services like healthcare and finance to survive. So what happens when there just aren’t facilities like clinics or banks near rural residents? This can be the reality in many rural areas that experience market failure, but the effects are a problem for rural and urban economies alike.

Essential services are increasingly going online and can meet some needs remotely, but limited IT infrastructure in many rural areas either makes high-speed internet physically impossible or prohibitively expensive for individual households.

Alternatively, people will need to commute to get to these services. This can be a challenge if the closest facilities for various essential services are either too far away from each other for someone to access multiple services efficiently, or if the facilities for all services are so centralized that traffic prohibits reliable access to them.

If these limitations can’t be dealt with in rural areas, people have a serious incentive to move closer to urban areas, where services already are. The resulting rural population decline not only can exacerbate market failure in rural areas, but rapid population growth in urban and peri-urban often drives up housing prices and puts pressure on infrastructure. These things then make accessing essential services more difficult for people in cities, who, in turn, might struggle to move out to rural areas because of market failure.

Addressing rural market failure is critical to more sustainable and resilient regions, and needs solutions that work for urban and rural communities together.

Rural market failure puts pressure on urban and peri-urban areas, so its solutions need to work for all communities. 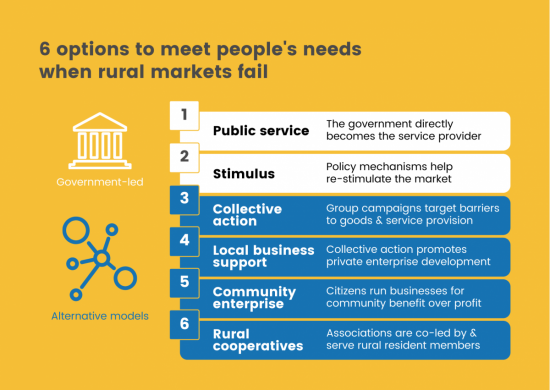 Government-led responses can take one of two forms. First, regional or local authorities can directly assume the administration and costs of providing the service(s) that the private sector hasn't been able to fulfill in a rural area. In doing so, the once-privatized function becomes a public service. Alternatively, governments can offer financial resources like subsidies or loans at lowered interest rates to re-enable private sector service provision, otherwise known as economic stimulus.

Alternative governance models describe ways that citizens can work together, whether through formal groups or informally, to address gaps in service provision. People can organize to take collective action to directly either provide services or address pervasive service gap issues. Examples of collective action can range from grassroots awareness-raising campaigns to mutual aid initiatives.

Citizen-led efforts to support local buisness development are a form of collective action that seeks to keep service provision embedded a more thriving private sector environment, rather than services being taken on by people as citizens. Citizens can also adopt an enterprise model in order to provide a service, but with the objective of community benefit, either instead of or with priority over increasing profit. This is called citizen-led social or community enterprise. Collective aciton, citizen-led local business development promotion, and community enterprises all aim to provide services to the general public directly.

By contrast, rural cooperatives are co-owned by and provide services to members who need to meet criteria to join, which often includes paying at least a small fee. Rural cooperatives in many places have such extensive membership that the services they provide impact the entire community's or even region's economy. 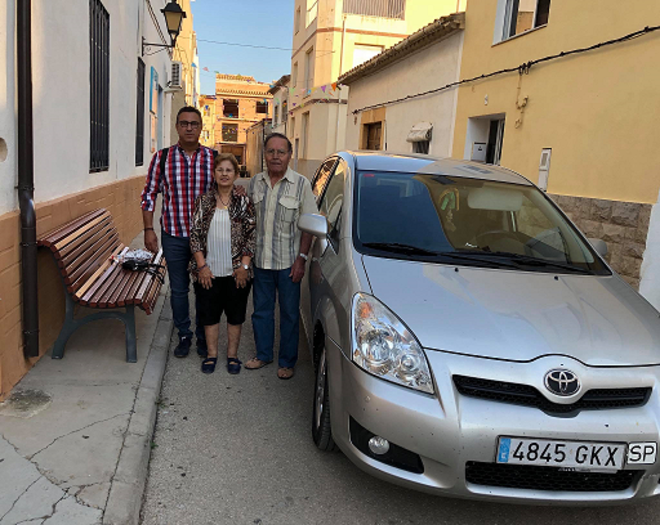 Like many areas, Spain's Castellón province (just north of Valencia) has seen a significant portion of its rural population migrate to urban areas. One of the most common motivations citizens cite for moving is to more easily access hospitals or relatives who can help provide care for aging family members. Many of the villages in rural Castellón lack public transit options, particularly for people with disabilities or who are elderly with mobility accommodation needs, to access healthcare facilities.

To encourage people to stay in rural communities, the provincial government created a new taxi service in 2018 that brings rural residents who aren’t able to drive to medical appointments. The state-funded program is administered through Castellón’s municipalities directly, who set up local councils to coordinate stakeholders from multiple sectors to implement the program and raise awareness among residents. 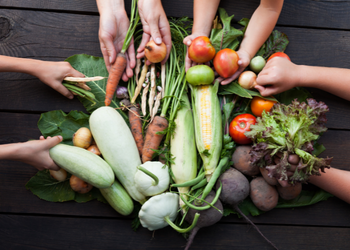 As you learned in this Learning Guide’s foundation modules, essential services in rural areas often struggle to generate profit, and need the support of public sector financing. Bidding on government contracts is one of the main mechanisms businesses use to fund services that markets alone wouldn’t be able to support. Transaction costs and knowledge asymmetries, though, often make it difficult for small or medium enterprises (SMEs) or other local businesses to bid on these contracts, putting them at a disadvantage compared to larger, mostly non-local companies.

One innovation that could help to level this playing field are Dynamic Purchasing Systems (DPS), online systems that let multiple potential suppliers participate in bidding at any time. DPS are a tool governments like the UK, which authorized its use in public procurement in 2015, can use to digitize and streamline bidding administration, making it easier for SMEs and local businesses to contend.

In an effort to co-ordinate all public sector food procurement at a regional scale, the UK national government's procurement agency Crown Commercial Services decided to initiate a pilot "food hub" using DPS in Gloucestershire during the ROBUST Living Lab process. 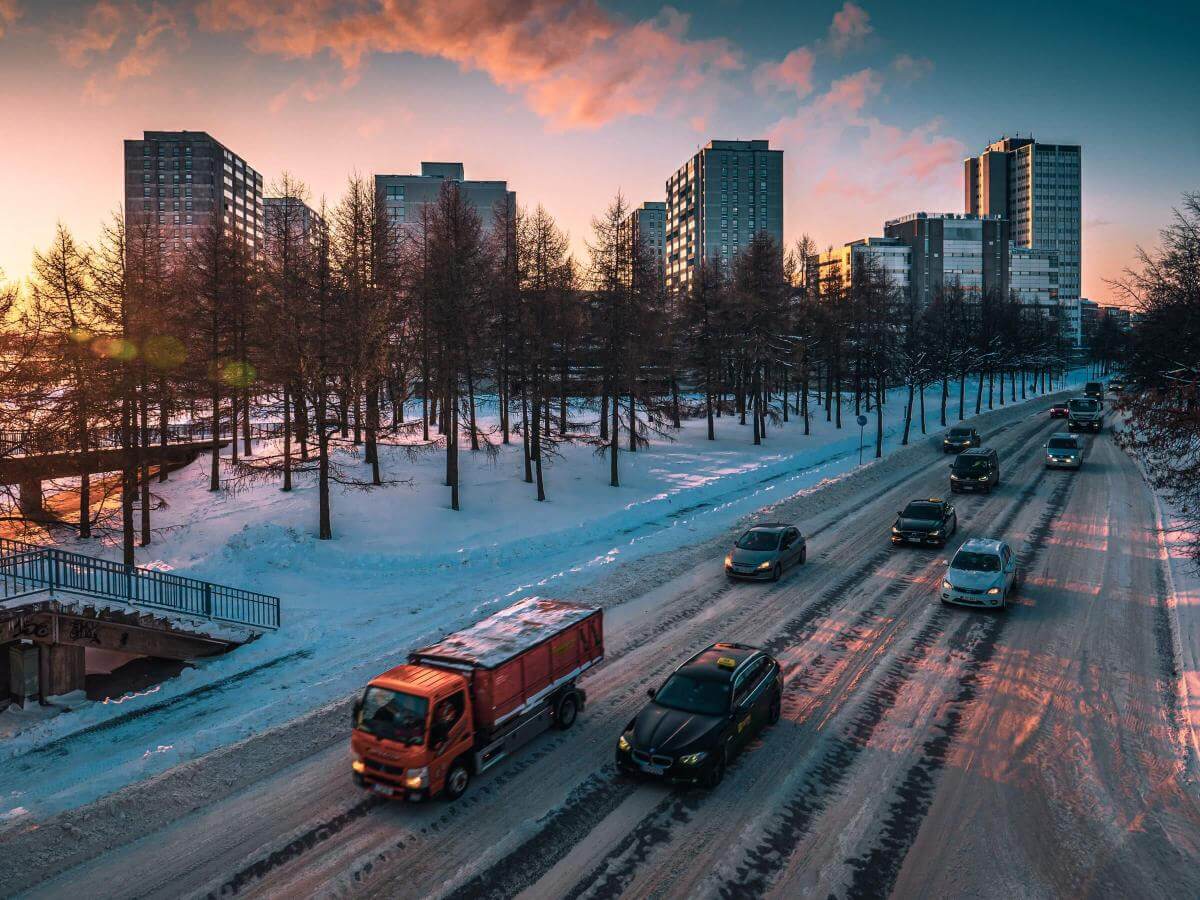 Life in the big, vibrant city, or in the quiet countryside?

“Why not both?”, asks a growing cohort of activists in Finland.

Instead of living in just one place, “citymaalaiset” (“city dwellers”) opt for multi-locality, and split their time between residing in Helsinki and smaller countryside communities, many of which are easy to get to by train or bus. By networking through online groups to organize sharing homes and transportation across the Helsinki region, citymaalaiset are able to live in multiple places without needing to own several properties or vehicles individually. This setup allows citymaalaiset to access the job opportunities and cultural activities cities offer, while benefitting from lower property costs and easy access to quiet green space in rural areas.

Localizing food supply and value chains holds tremendous potential to make regional development more horizontal and sustainable. In regions with large urban areas, though, distance can make it challenging for rural farmers to bring products to inner-city markets, even though these are a significant source of demand.

Village shops often provide communities multiple essential goods and services, from selling food to banking, but are closing in rural Mid-Wales at a dramatic rate. This decline is exacerbating the steady increase in distances local people have to travel to access any vital services. Healthcare facilities, schools, and pharmacies are increasingly concentrated in larger towns that are inaccessible from rural areas by public transit.

After one of the few garages and shops in the village of Tre’r Ddôl, in the parish of Llangynfelyn, closed in 2009, a group of local residents decided to convert the space into a non-profit café and shop, “Cletwr”, managed as a community enterprise. The community group that initiated Cletwr’s re-vamp secured initial funding to convert the space through multiple, small grants, and have been keeping operation costs low through volunteer staff.

Cletwr not only sells essential food and household items, but offers one of the area’s only places where residents can withdraw cash, drop off parcels, connect to free WiFi, and get IT instruction. Combining multiple services under one roof saves locals significant time and resources commuting. The combination of Cletwr’s role as a service hub and its café space also makes it an ideal place for many of the community’s cultural activities, including art displays and Welsh language lessons. 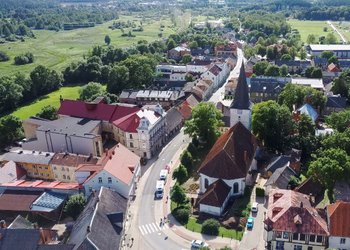 In rural areas, fewer private finance institutions like banks means that there are fewer places residents can go to directly to apply for credit. Even with an increasing number of remote banking options, relative scarcity of capital has been a reality in many rural areas for generations. This also makes it disproportionately difficult for individuals to establish a strong enough credit history to get loans, especially at affordable interest rates. This limits the potential purchasing power of rural residents and the viability of private entrepreneurship in rural areas, especially given that many economic activities usually associated with rural life, especially agriculture, are high risk.

One cooperative is providing locals in the rural region around Tukums, Latvia an avenue to accessing credit that is manageable. For a small membership fee, residents can join and co-run the Cooperative Credit and Deposit Union of Pūre, one of the county’s villages. The Union’s cooperative model and smaller scale means it’s able to offer members more direct access to more flexible and advantageous credit than would be possible through private or state banks.