There are few clearer rural-urban linkages than water and nothing more unifying than a catastrophic flood event. In this article, Dr. Daniel Keech, a Senior Research Fellow at the University of Gloucestershire's Countryside and Community Research Institute (ccri), shares how a region in Gloucestershire County came together after significant floods to develop and implement natural, low-cost, up-stream solutions to manage future flood events. 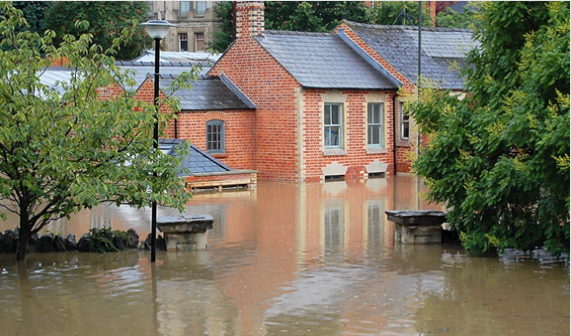 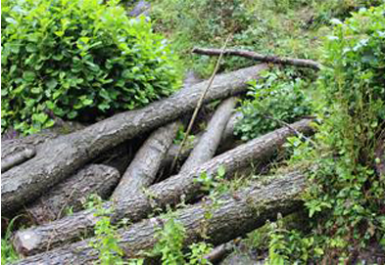 A typical "leaky dam" installation. Leaky dams are usually introduced natural barriers added to a stream/river to prevent soil and silt escaping and allowing water to flow at a slower rate.

Gloucestershire, in south-west England, has suffered two severe floodings in recent years. The first occurred in the summer of 2007, after very heavy and unseasonal rain. The second followed in the winter of 2012/13, when expansive areas of the region were inundated.

Although these flood experiences were extraordinary, the local authorities are anticipating more severe flooding in the light of future predictions. For example, winter rainfall is expected to increase by 14%, and sea levels may rise by at least 20cm (a conservative estimate) around the Welsh coast by 2050 (Wye Valley AONB 2015 ). Moreover, substantial expansion of the county’s urban settlements is likely in the coming decades, creating more hard surfaces by covering green spaces.

There is an official conviction that technical interventions, such as keeping culverts and ditches clear and building flood defences have a limit (and a high cost) in the light of ongoing challenges, and that ‘it is not economically viable to eliminate flooding altogether’ (GCC 2017 ).

In this respect, investing in green infrastructure and employing available natural resources are regarded as tools in sustainable flood alleviation. The inclusion of tree planting, for example, as a form of Natural Flood Management (NFM) to soak up water, as well as enhancing and connecting woodlands and wetlands, and creating including new open spaces is planned in both localised and landscape-scale development.

Enhancing water quality and maintaining water course flows are similarly regarded as an essential part of flood risk management. In this respect, the Stroud Rural Sustainable Drainage Scheme (RSuDS) offers some insights, aiming to improve water quality, flood risk management and biodiversity along the River Frome and its catchments in the east of Gloucestershire. This project was a good example of collaboration between researchers, local authorities, land owners and community groups to institute NFM techniques along the Frome catchment.

Initiatives have led to a better understanding of the relationship between land management and water run-off, improved management of bankside trees and the establishment of barriers (aka ‘leaky dams’ made from bankside wood) to arrest flows in times of flood. Such barriers are low-tech, low cost and relatively easy to maintain by the landowner. They also represent valuable wildlife habitats. As such, their maintenance can also support the work of local wildlife groups, such as the Gloucestershire Wildlife Trust, whose volunteers can help landowners install and maintain NFM interventions.

Much of Stroud District lies within the Cotswold Area of Outstanding Natural Beauty designation, meaning that hard engineering interventions are not always appropriate. Monitoring by the RSuDS team has shown a measurable reduction of flow during winter flooding from these low-tech, low-cost interventions in 2014.

Meanwhile, in the west of the county, beavers are being re-introduced to build leaky dams in the traditional way. But that’s another story…

Further information is available at the University of Gloucestershire's Countryside and Community Research Institute and The Flow Partnership - Stroud.

Stroud Rural SuDS Project - a snapshot from novadada on Vimeo.