Live Cases are a real-time journaling process for the Living Lab case studies. Follow along quarterly to learn more about the experiences and lessons learned taking place in the ROBUST Living Labs.

Live Case 2: Can A Living Lab Go On A Road Trip?

How do stakeholders from the public, private and voluntary sectors get together across a large, diverse region and work effectively to promote rural development?

This was one of the key questions considered at the ROBUST Wales Living Lab regional workshop in Aberystwyth in September 2019. The workshop set out to explore the experiences and challenges of collaboration and partnership working in rural Wales and to draw out lessons for future practice, but the workshop in itself reflected some of the issues faced.

The difficulties of bringing busy professionals together in a region where some participants needed to travel for over two hours just to get to the workshop meant that the exercise was combined with an already-planned event on the evidence needs of rural civil society and local government. 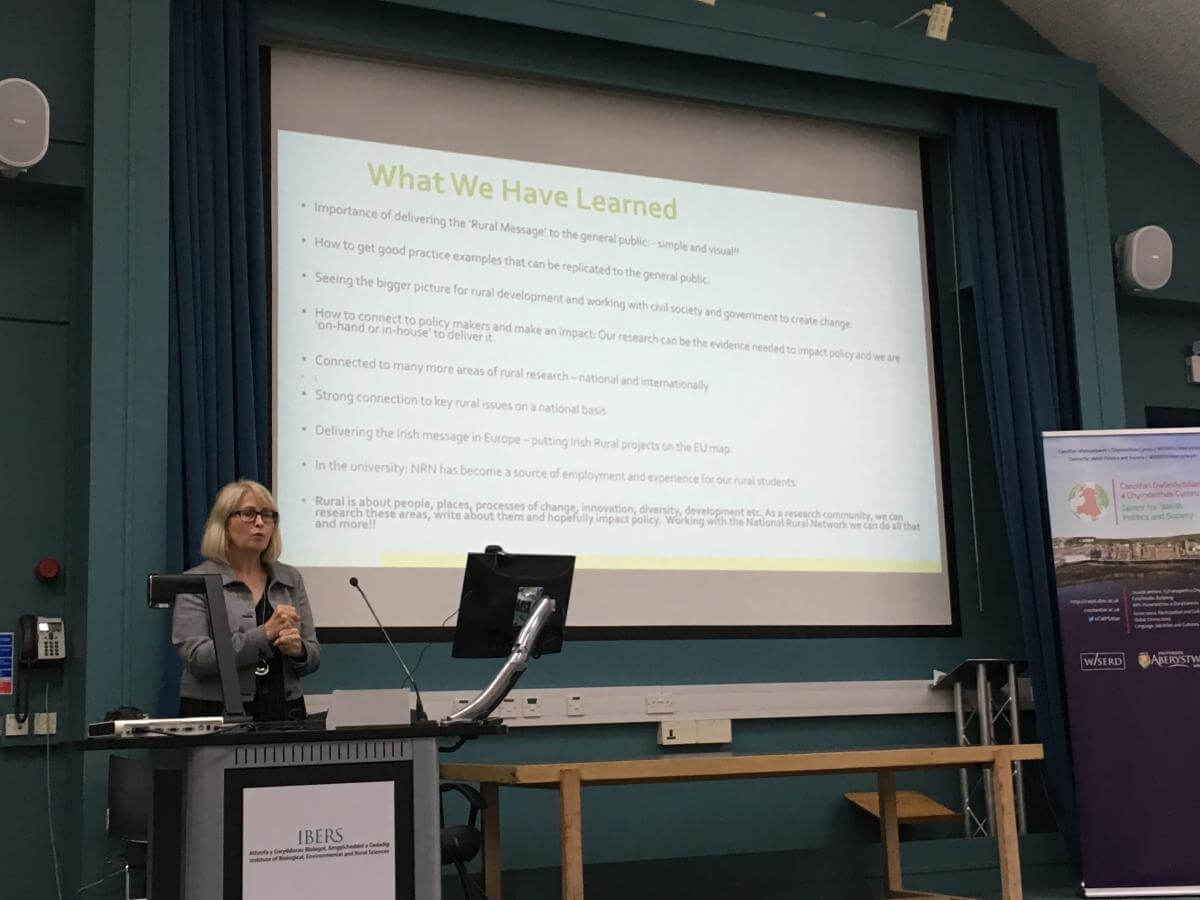 On the day, eighteen participants joined the workshop from local government (including officers responsible for managing LEADER local action groups) and voluntary sector groups, as well as independent consultants and researchers from Aberystwyth, Bangor, Cardiff and Swansea universities.

The workshop kicked off with short informative presentations on the policy context, research on rural Wales, and networking in the rural sector, and a guest talk by Dr Maura Farrell from the National University of Ireland Galway on learning from the Irish Rural Network.

Most of the workshop used a ‘world café’ format, with participants moving between small groups focused on the themes of communities and culture, economy and employment, environment and land use, and the changing population.

Cutting across these topics, however, was a common thread: the need for a partnership approach across sector and scales and between communities and government, and the obstacles to making it work. 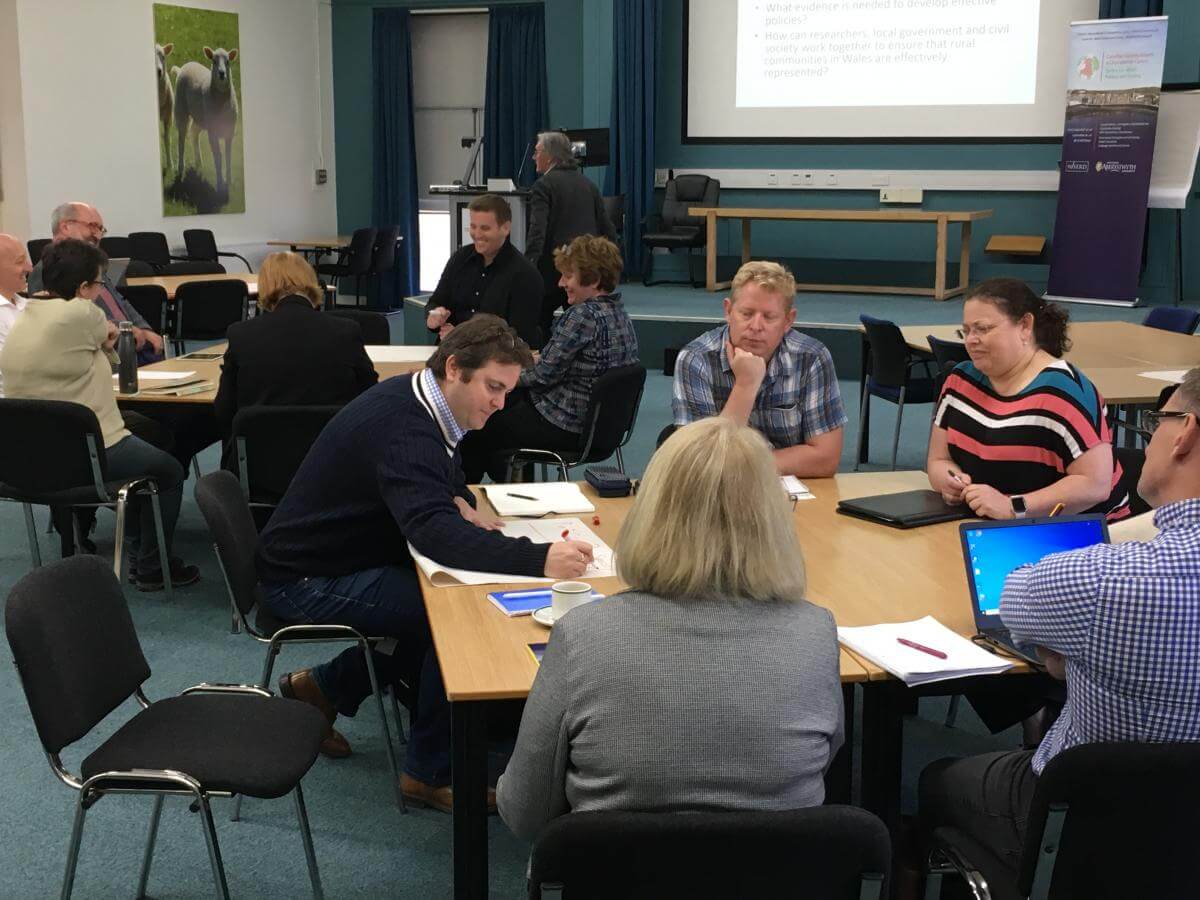 First, genuine cooperation is required in all parts of policy making and delivery for rural development. As one participant put it, “we need to talk more about the ‘co’ in co-production”.

The incorporation of LEADER into local government responsibilities was cited as an example of where cross-sector partnership had been reduced, limiting opportunities for a broad, inclusive approach to rural development as in Ireland. The Welsh Government was identified as the most important actor, but was also perceived as opaque, with difficulties connecting with the right people.

Second, it was recognized that some of the barriers to effective collaboration are structural and require systemic change. Participants expressed frustration that, “everything is about a project”, reinforcing a rigid, segmented model that constrains innovation and integration. Silos in government similarly militate against joined-up thinking, but these exist not only in policy-making but crucially in budgets, legislation and statutory responsibilities.

Third, inclusive rural development needs to engage and empower communities, for example through ‘place planning’ exercises. Successfully involving communities requires trusted intermediaries and honest brokers who can help build connections, and the delegation of responsibilities needs to be accompanied by training. Yet, equally some suggested that there could too much planning, that the real answer was just “to let people get on with things”.

Live Case 2: Can A Living Lab Go On A Road Trip?

Over the past month, the Mid Wales team at Aberystwyth University have clocked up many miles across the countryside. We’ve been doing more than sight-seeing. Our mission has been to explore the challenges that different parts of rural Wales currently face, and to learn about the practical initiatives and innovations that hold promise for the future.

We’ve taken our envisioning process out of the office and onto the road because we need to understand what’s happening across the region in order to imagine what rural-urban synergies in Wales could look like. 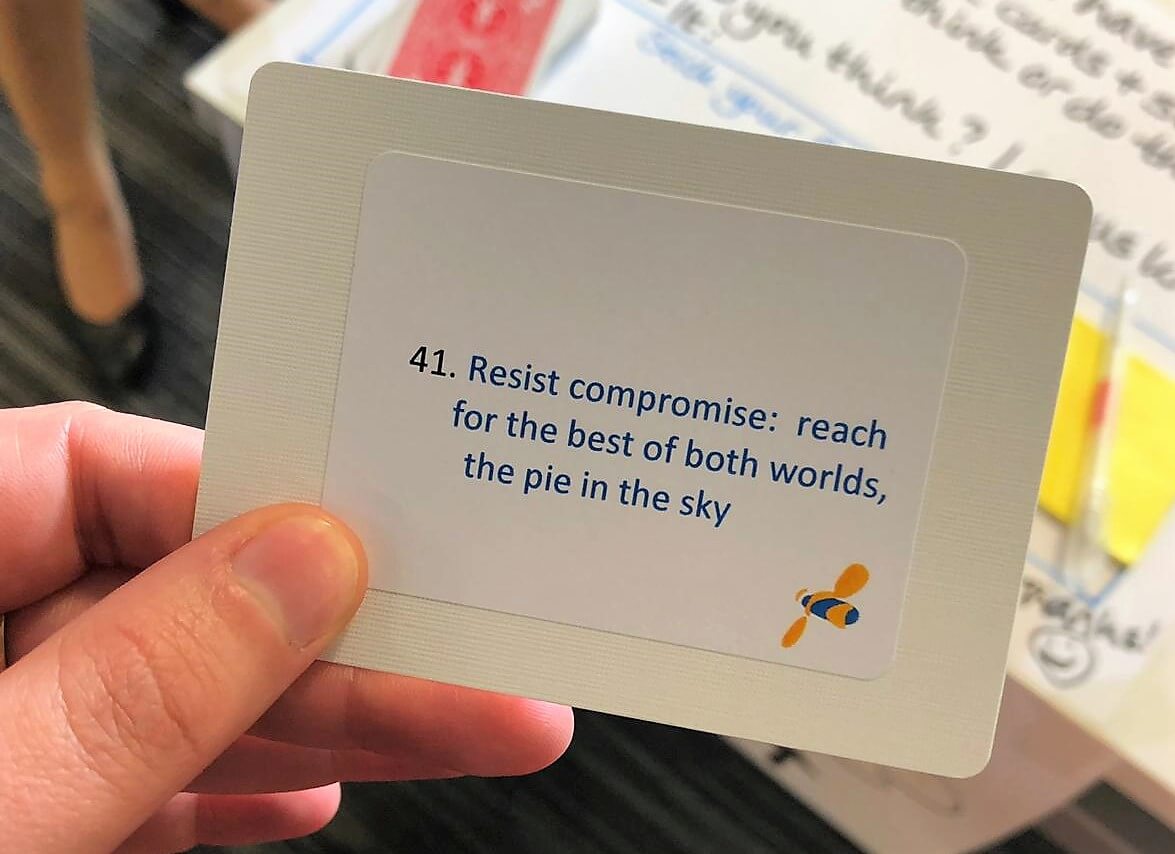 We get some rural-urban advice via a thought experiment run by Public Health Wales. (Photo by Bryonny Goodwin-Hawkins)

The Welsh Local Government Association’s (WLGA) Rural Forum represents the nine – out of 22 – local authorities (counties or municipalities) in Wales that are predominantly rural. These authorities cover all of Mid Wales, and include some of our northern and southern neighbours.

Rather than draw a strict line around Mid Wales, our Living Lab is working with all the Rural Forum members, using research to inform and enhance their shared agenda. But, reaching a shared agenda starts with separate conversations.

The nine rural authorities are geographically diverse: from Monmouthshire, in the commuting corridor between the Welsh capital of Cardiff and Bristol over the English border, to ‘deep rural’ Gwynedd, which is largely in a national park.

The ROBUST envisioning process provided an opportunity to explore what makes these different rural regions unique, while honing in on what they have in common. To do that, two Aberystwyth University researchers hit the road.

We visited most of the local authorities on their own patch. As well as building academic-practitioner relationships face-to-face, we were able to see some promising initiatives in situ – like the ‘incredible edible’ garden that hosts a pollination project (Mid Wales is part of ROBUST’s sustainable food systems community of practice) or the potential site of a new harbour development (we also participate in the public infrastructures and social services community of practice).

During our visits, we met with senior representatives from each local authority, both elected officials and practitioners with expertise in rural development, economy, regeneration, planning and transport. Talking together around a table proved an opportunity for honesty, aspiration, and debate. Animated conversation flowed, and we were surprised by how rarely we needed to refer back to our pre-prepared questions! All the talks covered topics including: 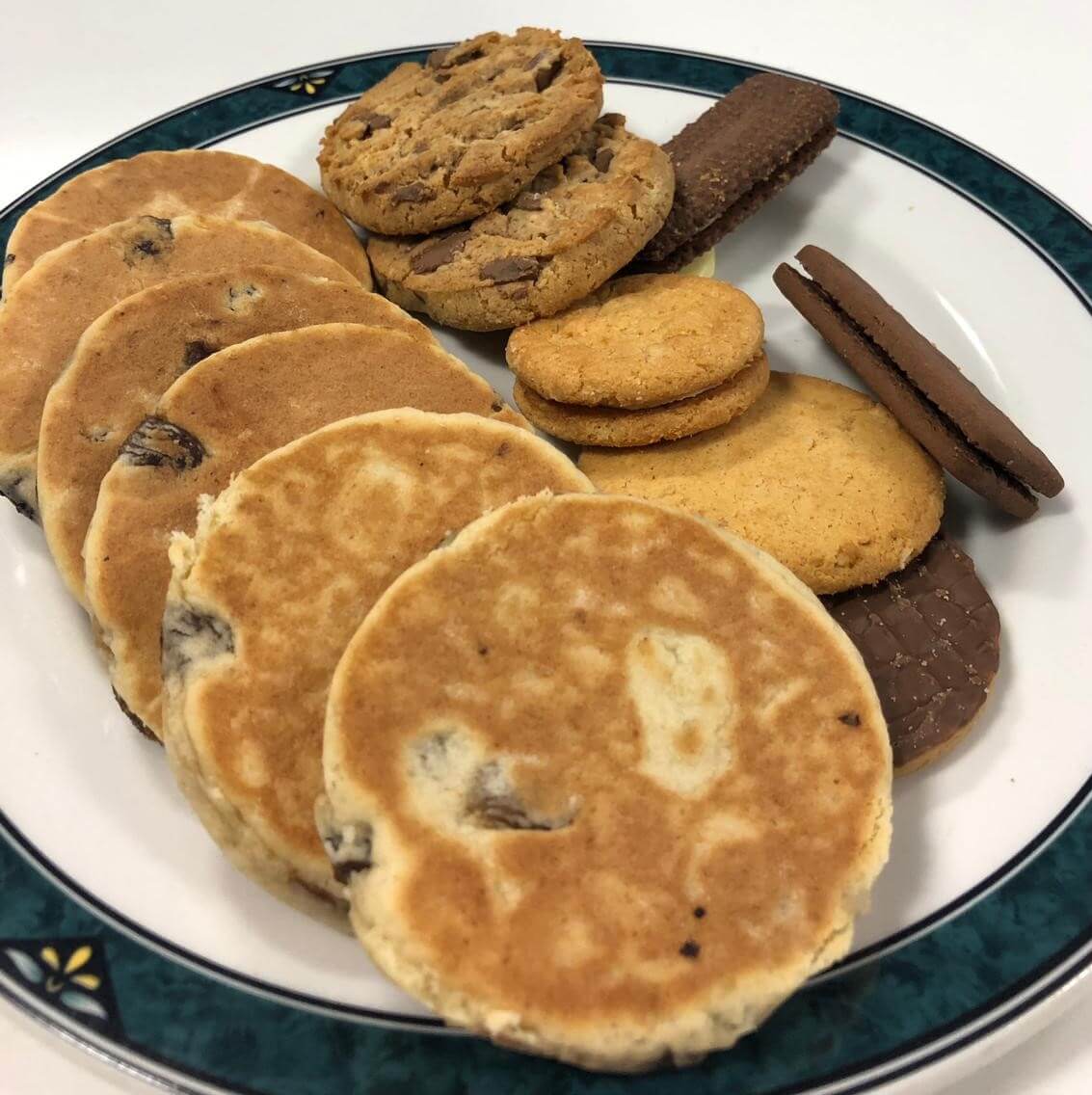 Our discussions regularly returned to the challenges that rural areas experience or perceive. The three ROBUST communities of practice that our Living Lab participates in help us to focus on some of the similarities that different parts of rural Wales share:

In Welsh Government policy, ‘rural’ is largely equated with environmental or agricultural issues. These really matter – but their predominance suggests that policy is being led by an urban perspective, which overlooks cultural and community life in rural places. Indeed, supporting the ‘liveability’ of rural places, including through thriving culture, is a long-term challenge. The challenge is all the more acute since the Welsh language is an integral part of community life in many rural areas.

Rural areas in Wales are often under-served by infrastructures. Increasingly, concerns are shifting from inadequate roads to poor digital connectivity and ‘not-spots’. Both provide vital rural-urban linkages, including access to markets and opportunities for business innovation. Yet, infrastructures are often associated with market failure, with blunt economics meaning that rural areas continue to miss out on the investment they need. Amidst neglected infrastructures and market failures, facilitating connectivity remains a challenge.

Food is an issue of growing concern. There is an increased engagement with sustainability and food chains at a local level. Brexit also looms large, with the likelihood of reduced agricultural payments and potential disruptions to export markets. Rural areas do not only grow food, but are often sites for research and development facilities, and processing and packaging plants. These can be important local employers – but with risks ahead, the challenge is to support their development. 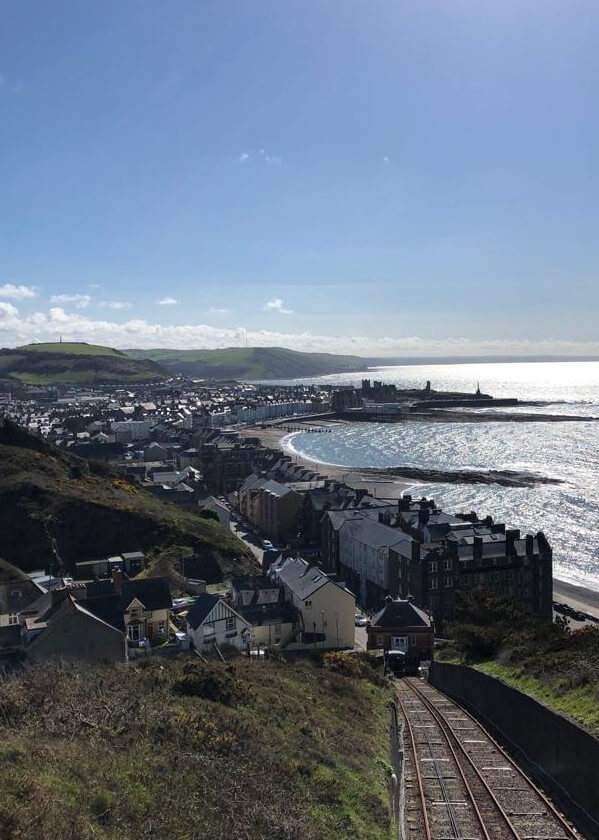 Aberystwyth is the largest town in Mid Wales – but not all of the region is coastal. (Photo by Bryonny Goodwin-Hawkins)

ROBUST aims to connect rural and urban, for mutual growth and benefit, towards a shared and sustainable future. Mutual benefit – allowing both rural and urban to grow – is crucial here. Creating mutual benefit requires innovative approaches and policy support. But, it’s clear from the conversations we’ve had since taking the Living Lab on the road that rural Wales isn’t an equal part of the policy equation.

When both dominant growth models and government mindsets are urban-oriented, rural areas are left lagging. For many parts of rural Wales, the challenges are compounded by long distances from the centres of economic development. While there are plenty of arguments to be made for better funding for rural areas – especially due to continued cuts to council budgets and the impending loss of EU regional investment – redistributing finance is not in itself a recipe for rural-urban relations, either.

We need innovative strategies to support and sustain inclusive growth. Although we’ve talked about plenty of problems in our road-trip around rural Wales, we’ve also learned a lot about positive opportunities, including:

How can we grow positive rural-urban connections at a distance from the city? We are trying to answer this question through our Living Lab in Mid Wales. As a region which doesn’t have a dominant urban centre, models of city-led growth are not always the answer in this part of the UK. These models also leave us stuck with the assumption – historically put forward by academics and policymakers alike – that predominantly rural regions like Mid Wales will always be left behind, or at least disadvantaged in some way. It’s easy to put Mid Wales in a box marked ‘rural development’, and to seek funding on the basis of being a ‘problem area’, but it is a lot harder to imagine more positive alternative futures.

In the meetings and consultations we’ve attended in Mid Wales, we have often heard the same issues come up: young people are leaving, shops are closing and other services are being lost, and the roads are bad. These are real problems and they cannot be simply overlooked.  However, they’re a bit like a script that people repeat when they hear the word ‘rural’. And, the more people repeat these same scripts, the less they tend to think about the complex causes underneath and about the differences between places. What’s more, repeating these truisms means that the issues that don’t fit get left out of the conversation. So, our first experiment in the Mid Wales Living Lab is simple: what would happen if we worked without the usual rural script?

In the coming months, we’ll be working through the Welsh Local Government Association’s Rural Forum to talk to local authority stakeholders about their localities. We’ll be asking what needs to change and what can grow – but we won’t be asking stakeholders to think "rurally". We want them to surprise us! These talks will help us build a new picture of Mid Wales: one that might still have bad rural roads, but also one that has local food networks, book-a-bus services, and innovations over the radio waves. Rethinking the rural script in this way isn’t about a new definition of the rural, or the kind of academic rethinking that ends up in articles nobody reads. The Mid Wales Living Lab gives us real opportunities to understand our region in new ways, and to turn that knowledge into practical action.

Admittedly, the UK will face many challenges in the coming year. Whatever the outcome of the Brexit negotiations, there will be implications that domestic legislation, policy and funding will need to address. It will be critical that the needs and aspirations of rural communities are front and centre in the design of new funding approaches that replace what we’ve traditionally known as EU funding. It’s certainly a challenge to try to tell new stories about Mid Wales when we don’t know what the economic future holds in three months, let alone three years. Let’s remember, though, that politics in Brussels, London, or Cardiff is also a rural-urban connection … what matters for Mid Wales is that the traffic isn’t one way.